On the South Pier, at the Port of Catania, is recovered aground the first boat that in 2013 carried migrants from Africa to the coasts of Catania. Among them, six children Egyptians, exhausted for the trip on that vessel, were tragically drowned trying to reach the seashore, a few meters far from the Lido Beach Green (Lido Verde). The artist chose to merge his body with the wreck and the history of which he is a silent witness for his first shot of the MIGRANTS project.

The scenario of the tragedy evoked by the first work, the Lido Verde, provides the second background to the Liu Bolin’s photographic project. «Being immigrants lying on the sand - says the artist -, for someone they may seem dead; instead my intent is to describe their arrival and the start of their future».

Compared to the most famous and longest-running series Hiding in the City, where Liu Bolin is the focus of the photographic subject, the evolution of his shots called Target series provides for the disappearance of more people in the context, in line with the content.

«In another work that belongs to Target series - says the artist - I chose to put a boat on which they were transported four hundred people. It is hard even to imagine the physical and psychological pressure suffered by men and women during these trips. I would like to draw attention to these events, showing the imperfection of humanity». The shot was made with some of the survivors ships moored at the port of Catania and with around twenty of African migrants. A warning to all, with a breath of confidence. «In my work - says Liu Bolin - migrants disappear in front of this and three other boats moored. The disappearance evokes the evanescent relationship between life and death. My intent, however, is to favor attention to life and give hope».

The migrants involved in the fourth shot posed after have been painted with the same color blue of the European Union flag. These are the words of the artist about: «No matter what is their religion, ethnicity or from which country the migrants are, all of them are camouflaged with the same blue background while they perform a gesture that has to do with their spirituality. I wanted to show the opportunity of changing, or how this present generation may move from Africa to Europe and live happily». The immediate recall for the audience is toward a contemporary secular Pieta.

Recalling the ancestral roots of African migrants and the ritual body-painting of some tribes, the artist from Beijing has chosen to paint the word "Future" on the naked torso of each of the participants in the performance, «demonstrating - recalls Liu Bolin - that every person, to achieve better living conditions, is prepared to face any kind of adventure, also the most dangerous, taking a fundamental decision which sometimes results in the risk of losing life itself».

The last of the six shots of MIGRANTS belongs to the series Hiding in the city, in which it is again the Beijing artist himself to be portrayed merged with the surrounding. The sixth location is the port of Catania again - as in the first and in third works of the project-, on whose docks have been moored for several years a few fishing boats that have carried, each of them, up to four hundred people in one journey of hope from Africa to Italy. The title of the artwork corresponds to the name of the ship on which the artist stands. 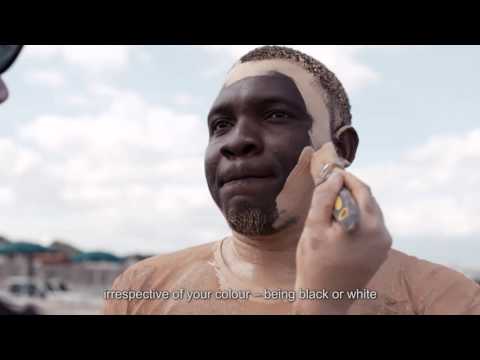